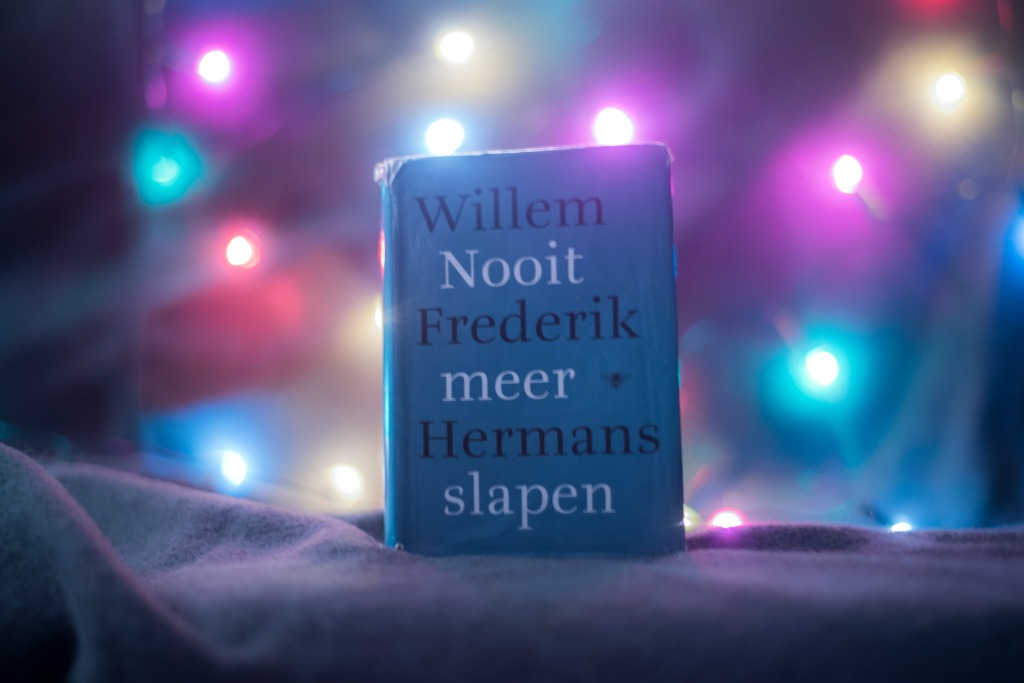 Last summer my boyfriend and I were visiting a friend of his, who is a smart man. My boyfriend is also a smart man. I’d like to think I’m somewhat smart, but my boyfriend is the thinking-about-things kind of smart. Just as this friend who is also an avid reader. He and my boyfriend often talk about books, what the writer has been trying to say and what they think of it. I’m normally just listing to get a new recommendation for my intellectual pile. The last title I got was Nooit meer slapen, by Willem Frederik Hermans. A Dutch book, but translated to English (Beyond sleep is the translated title).

Beyond sleep is about obsession, suffering and getting to know oneself. I found it a hard read especially in the beginning, it really needs some focus to get in there, but after a while, it’s strangely addictive.

The main character is Alfred, a Dutch Geology student, who’s in Norway to find meteor craters and with this fulfill his dead dad’s dream of having academic fame. His dad died when he was young and wanted Alfred to reach greatness. His mum has been pushing Alfred after his dad’s death to get here and make sure his dad would be proud of him, putting a lot of pressure on Alfred. The start of his expedition is poorly when he needs air photographs of the region, but find no help in actually finding them. As a result, and with a combination of his gloomy thoughts and the midsummer sun, he’s unable to sleep. His travel company  exists of:

Other characters are minor, his professor is only briefly mentioned. Alfred meets a Norwegian professor who is supposed to help with the air photo’s but wants to revenge the Dutch professor and Alfred‘s mom who pushed him into trying to realize his dad’s dream.

Beyond sleep is rightfully a Dutch masterpiece, but not for everybody. It’s full of metaphors and underlying meanings, but it might be an acquired taste. I’m not really a person who’s likely to see underlying meanings and focusses more on the story itself, so I can’t go into what Hermans has been trying to say without saying it. But, what I did find eccentric was his writing style. The whole novel is just Alfred‘s thought. Which, as I type this, doesn’t sound too weird, but it was when I was reading it. Probably because he’s nonpartisan, he connects an event straight away to a feeling and most of his feelings aren’t happy ones. Normally I can deal pretty well with non-happy people, I’m more likely to find them interesting, but Alfred gets annoying and whiny. After a while, I really wanted to tell him to shut it and quit whining, but the last chapters made up for that again. The scene on the bus back was positively endearing.

To be honest and to be alone, you must discover something that makes it worthwhile to suffer.

All in all
You can debate about if you like it and why, but it’s clear it’s a carefully composed masterpiece. Written in the sixties, but still relatable (except for the lack of mobile phones and internet) and relevant. I think a lot of people are still focussed of making that one amazing discovery in whichever field and making their name famous. So much that they might forget who they are and what other dreams they have. Alfred‘s journey is one of self-loathing and discovery, and a clear message at the end: every obsession can end when you realize why it’s an obsession.

This site uses Akismet to reduce spam. Learn how your comment data is processed.

Through the hills we go ⁠//
Although aware of the current pandemic, she's unafraid of the virus: our brave and cunning warrior gladly takes on every task that comes onto her path, whether that is sitting on her protectees' lap to ensure no virus is approaching or demanding more cuddles to fight off negativity. ⁠
At one point last year I decided to do a new year's post with some light painting. And then left it till the very last moment to actually do it. Surprisingly enough it turns out to be quite hard, so this is the only result that resembles '2020' a tiny little bit.⁠
The longest night has come and passed, the days are slowly about to get longer again. The sun is creeping back into our lives; technically speaking that is since there's been nothing but clouds and rain here, but more light must equal a brighter outlook on the world.⁠
New places, new people, new weather. Get on a train and travel, take a boat and sail. After mere hours the weather has become their normal, instead of yours. ⁠
Winter is coming in, and the plants in our garden have prepared to hibernate another cold, dreary winter. No more leaves, no more flowers. Arid sticks and mushy grounds is all that is left-over from what used to be a vibrant centre of wildlife, where bird raised their kids and domesticated cats channelled their wild roots. Filled with the buzzing of bees and the occasional scattering of very tiny feet.⁠
The cold mornings are upon us again, and the bed seems to be an impenetrable fortress where no-one gets out. Alas, this is to be our life for now.⁠
I'm not a massive city fan, I prefer the quietness of the outside but views like this make almost dying everyday worth it.⁠
Good morning, Mister Magpie⁠